Earlier this year I was aimlessly crocheting squares with some left over wool I had lurking about. Then on Sunday I bought a cushion that was heavily reduced in TK Maxx, thinking that it would fit the French Fancy Pillowcase. Anyway, it didn't, so I am putting it to use as the first crochet cushion project. I'm getting a bit obsessed with it now, dreaming up ways of attaching it to the existing cushion cover, (that I originally didn't like very much but has started to look more and more attractive now I have realised that it will make life easier if I use it as a back,)and then doing a lairy edging round it.
Last night I also crocheted some flowers from the Mollie Makes magazine. I did one wrong but it came out very nicely indeed so I slung a button it, popped it in a box with a bath cake thingy and gave it to my friend in work who is going through a bit of a rough time. I think I have worked out how to do it properly although I have to say the pattern isn't very clear, unless it's just me being a thick mare. I am intending to make a few flowers and add them to the cushion. This is providing, of course, that I don't get bored with this in the meantime and slink off the garage to start painting tables again. (As well as a wool stash I also have a table stash...)
Some photos of the WIP: 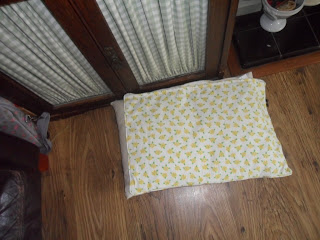 And the half sewn, half crocheted together squares: 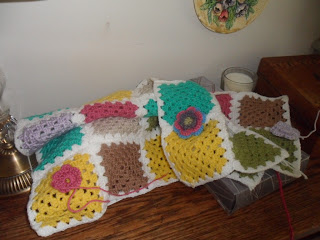 Please note that I have tried to do that Bloggy Mysterioso thing where you only half show something thereby tempting one's readers and hoping they come back for another butchers at a later date to see the finished item. I'm learning fast...
And now for the flower, the one I kept that came out ok. 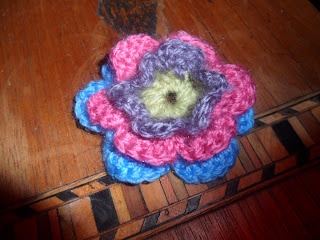 Quite happy with that actually, bordering on nauseatingly smug.

After work yesterday I hopped along to two of the charity shops in the village. I had this notion that they might have some good patterns and some coloured crochet hooks. I did buy two hooks, not coloured but no patterns. Mainly because there were about a million of them sitting in the basket and I didn't have the energy to go through them all. Other than the two hooks, nothing doing. I don't know if I'm not looking properly or the stock is a bit pants lately but I drove home all deflated and fancying cake. I'm praying that it will stay dry this weekend so I can go to the boot sale. And I might, only might go to Leigh on Sea on Saturday. I am getting withdrawal symptoms for a decent tooty purchase.
While I'm here I'll carry on for a bit. Getting very excited about breaking up from school next week. Very excited indeed. I have all sorts of vague ideas about what I'm going to achieve during the holidays. Painting the tiles in the kitchen, possibly painting the summerhouse, (this one is a tad ambitious,)putting some things up for sale on ebay, doing another boot sale... the list goes on. I will probably spend the first week loafing round the house with my dressing gown on watching films and faffing about with wool and a crochet hook.
Right the WIP cushion is calling me and so are the Teenage Daughters who will waste away if I don't get some dinner on immediately.
Laters.
xxx
Posted by Missy at 16:16 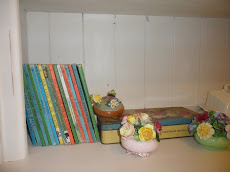 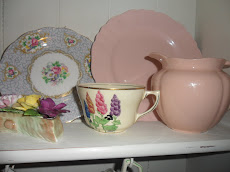 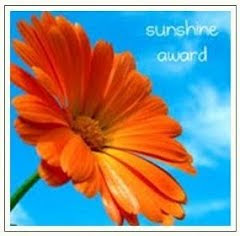 Missy
I work part time and live with my husband and two teenage daughters. I love finding a bargain, kidding myself that I am going to start 'crafting,' reading, be it books, magazines or blogs and putting off today what I can do tomorrow. And then not doing it. I have a garage full of half painted and not painted furniture along with a large selection of paint. I have a burgeoning collection of home magazines and have never been known to throw away a book. My house is drowning in paper. Edith Florence, a blog or a chance to spout waffle into the ether?